The Springfield Symphony Orchestra (SSO) has announced a 2022-23 season that will include six classical performances and two “pops” concerts. The first concert in the new season will be presented on Saturday, October 22 featuring world-renowned conductor JoAnn Falletta, music director of the Buffalo Philharmonic Orchestra.

Featuring Zoltan Kodaly’s Dances of Galanta, Edward Elgar’s Cello Concerto with guest cellist Joshua Roman, and Antonín Dvořák’s Symphony No. 7, considered by many musicologists to be his best symphony.

Each work encapsulates the soul of a country—from Dvořák’s noble expression of his love for the Czech people, to Kodály’s wild recreation of a Hungarian gypsy band, to Elgar’s poignant grief for the tragedy of the first world war in England. The program is a heartfelt tapestry of three of the greatest works in our orchestral repertoire.

All ticketed patrons are welcome to join us in advance of the performance for a Classical Conversation between JoAnn Falletta and Joshua Roman, onstage at 6:30pm. Following the concert, patrons are invited to a champagne toast in the Mahogany Room to celebrate Opening Night.

The Springfield Symphony Orchestra is delighted to welcome patrons back for a robust 2022-23 season that will include six classical performances and two pops concerts!

Two of the guest conductors that will be joining us at Symphony Hall this season, JoAnn Falletta and Theodore Kuchar, have been included in the group of the 10 best living conductors in the world, according to David Hurwitz, a music critic and executive editor of ClassicsToday.com, the first and only classical music daily.

The two pops concerts in the concert schedule are Joy to the World! on December 3 with conductor William Waldrop featuring guest soprano Camille Zamora and the Springfield Symphony Chorus; and New Orleans Jazz: Mardi Gras on February 25 with conductor Byron Stripling, who also will perform trumpet and vocals, accompanied by a guest jazz pianist/organist and drummer.

Patrons who purchase Series tickets to attend all 6 classical concerts receive a number of special benefits, including discounted and flexible tickets and invites to SSO special events. For more information on these benefits and to become a Series Subscriber, please visit https://www.springfieldsymphony.org/subscribe-today/

Go online or contact the Box Office to purchase your tickets today! 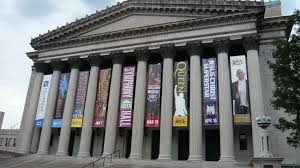