The Letter’s Project: A Daughter’s Journey, with Eleanor Reissa
“The Holocaust,” Eleanor Reissa writes in this unforgettable and courageous book, “is attached to me like my skin and I would be formless without it.”
In 1986, when her mother died at the age of sixty-four, Eleanor Reissa went through all of her belongings. In the back of her mother’s lingerie drawer, she found an old leather purse with a wad of dried up papers in a brittle baggie: fifty-six letters, handwritten in German by her father, in 1949 – only four years after Auschwitz – to her mothers, also a refugee, already living in the United States.

With her father’s letters as her silent guide, Eleanor goes on a journey down the River of Time, unearthing the unknowable – about her family’s past, about the Holocaust, and about her own present. 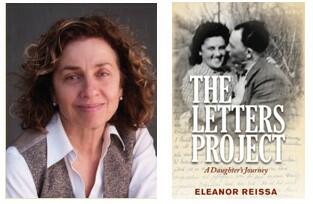 Eleanor Reissa is a Brooklyn born and bred victim/beneficiary of the public school system from K through college. In spite of that (or because of it) she has lived a life greater than her own expectations. She is a Tony-nominated director (Those Were the Days), a Broadway (Indecent) and television actress (The Plot Against America), a prize-winning playwright (Wishful Thinking), a former artistic director of the world’s oldest Yiddish theater (Folksbeine), and a singer in every major venue in New York City and in festivals around the world. She is a regular performer at the Yiddish Book Center in Amherst. She is a storyteller in English and Yiddish, and the daughter of parents who lived through the Holocaust. She is the host of the Yale University/Fortunoff Archive podcast, Those Who Were There:Voices of the Holocaust. Her memoir, THE LETTERS PROJECT: A Daughter’s Journey, will be published on January 18th, 2022.

This live event will be presented via Zoom and will stream live on the Yiddish Book Center’s Facebook page. Space is limited. If you’d like to reserve a virtual seat in the Zoom audience—which will allow you to submit questions—registration is required.