The Northampton Arts Council is delighted to present Northampton’s 35th annual New Year’s Eve festival of the performing arts on December 31. First Night continues to be a special opportunity to celebrate the cultural vibrancy of our community while sharing time with friends, neighbors and visitors. As always, there will be a magical display of fireworks early in the evening and a traditional midnight “ball-raising” at the Hotel Northampton. Please plan to join our city’s signature, family-friendly New Year’s Eve festival of the arts where a single bargain-priced button buys admission to every show.

It all kicks off at noon at the Academy of Music with two performances of SHOW Circus Studio! A performance of “Mary Poppins” will be presented by Paintbox Theatre at noon and 1 p.m. at Theatre 14 at Smith College. There will also be Mad Science of Western New England at 4 p.m. and A2Z Science Yo-Yo Guy at 5 p.m. at the 33 Hawley Flex Space. You can also hear a musical story by John Porcino at Forbes Library, or sing along with the Nields at their family show in First Churches Sanctuary. And the Valley Light Opera will offer up two performances at 3 and 4 p.m. at Theatre 14 at Smith College.

The sky will light up with Northampton’s annual New Year’s Eve fireworks at 6:15 p.m. from the roof of the central parking garage to top off the afternoon and signal the start of the evening entertainment. Then, at 11:30 p.m. as midnight nears, people will begin to gather at the Hotel Northampton for the not-so-traditional raising of the ball accompanied by DJ Roger Jr. spinning tunes in the street for dancing leading up to the dramatic ball raising at midnight.

A single bargain-priced button opens the doors to every event at every venue. First Night buttons go on sale at many locations (see below) throughout Western Massachusetts in early December. Those who prefer to purchase buttons online may collect them downtown on the day of the event.

Parking: On First Night, there is free parking in all of Northampton’s municipal lots EXCEPT the downtown parking garage. Smith College parking lots and the Smith College garage on West Street are free and open to the general public all day. There are also lots at Forbes Library, the Northampton Senior Center, and the World War II Club.

Please remember that access to and from the E.J. Gare Parking Garage will be restricted from approximately 5:45pm to 6:45pm because of the fireworks display. The same is true for the adjacent municipal lots.

At the venues: In order to accommodate our audiences and to make things easier for the volunteers, please cooperate by lining up at entrances in an orderly fashion and exiting the venues after each performance. This also keeps things running on time. Note: Many shows are offered twice, so if you don’t make it into the first one, you’ll probably catch the second.

WE STRIVE TO POST THE MOST CURRENT AND ACCURATE EVENT INFORMATION, BUT CHANGES AND CANCELLATIONS DO OCCUR, SO PLEASE CHECK THE OFFICIAL EVENT WEBSITE TO CONFIRM ALL DETAILS BEFORE ATTENDING. 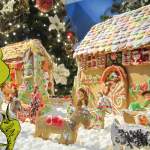