If you are looking for a concise, accurate account on the White Star Line, this book is for you. A big, handsome, hardcover beauty published by the Titanic Historical Society is chock full of glorious color illustrations. Hundreds of rare images from the author’s collection, many published for the first time, are sharp, visually striking and photographed in their natural color.

Purchase online at the Titanic Historical Society Museum Store and pay Only $40.00!

This book is a fantastic resource with a wealth of information and showing loads of White Star collectibles as examples.

The Definitive Book on the other Titanic Movies 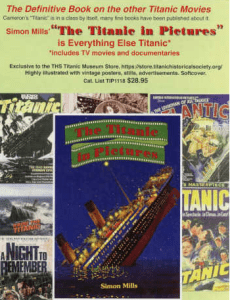 After a collision with an iceberg on April 14, RMS Titanic sank in the early morning of April 15, 1912 in the North Atlantic Ocean, four days into the ship’s maiden voyage from Southampton to New York City.

Discover Titanic Where It All Began. Home of the World Famous Titanic Historical Society Collection. The collection covers a broad scope of Titanic’s rich history, from original blueprints of her tank top donated by her builders, Harland & Wolff, to the 21st century where the ship has become a popular icon from movies and TV. The Titanic Historical Society’s (THS) collection, one of its greatest strengths, is its collected works of rare Titanic survivor artifacts, one of the finest anywhere. Many were donated by the survivors themselves.

If it weren’t for Edward Kamuda, much of the information we have today on Titanic wouldn’t exist; it would have been lost through time and neglect which, unfortunately, happens too frequently because many people do not value history. A Titanic survivor’s death and a movie in the family’s theater was the catalyst that began a life’s work of preserving the ship’s history.