Springfield, Parade of the Big Balloons 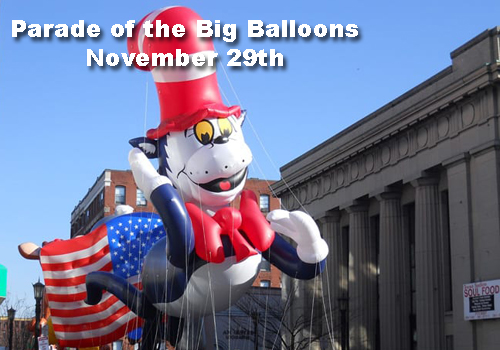 Main Street in downtown Springfield will be filled with people, bands, motorized contingents, huge colorful balloon characters and much more the day after Thanksgiving, as the Spirit of Springfield launches the annual Parade of the Big Balloons. The helium-filled balloons will include the famed, 75-foot Cat In the Hat, the MGM Lion balloon, and a balloon of the American flag. The rest of the parade will feature cold-air inflatables that rise 20 feet in the air.

Santa will arrive high atop Springfield Fire Department Ladder #1. He will be waving to the crowd and watching out for good girls and boys.

The parade will run along Main Street, Lyman Street and Margaret Street. Several balloons will be on display on Union Street until noon for photos (next to MGM skating rink).

Since 1991, the Spirit of Springfield has helped welcome Santa Claus to town with Springfield’s own 75-foot inflatable “Cat in the Hat”, a few of his inflatable friends, bands and colorful contingents. At 11AM on the day after Thanksgiving, they promenade down Main Street, entertaining crowds estimated at 70,000.