An event every week that begins at 9:30 am on Sunday, Friday and Saturday, repeating until March 27, 2022

For many at Old Sturbridge Village, the first whiff of spring isn’t the aroma of spring flowers – it’s the smell of wood smoke and maple syrup, a sure sign that the sap is rising and spring is on the way.  Join us for “Maple Days” select dates in March, when the Village’s working sugar camp demonstrates maple sugaring as it was done in early 19th-century New England.

See the entire sugar-making process, from tapping the trees to “sugaring off,” and learn why maple sugar was more commonly used than maple syrup in early New England.

Costumed historians will also cook period foods made with maple products and the tinner and cooper will make maple-related items.

Fridays, Saturdays, and Sundays in March 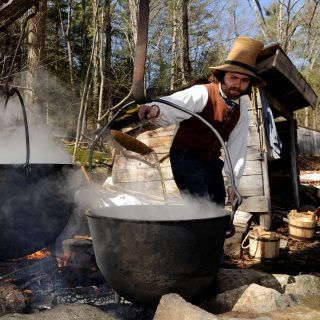 The Goal
Today, maple syrup is typically the goal! We love the golden liquid on pancakes and waffles. In early 19th-century New England, however, maple sugar was the ultimate goal! Even more than that, the goal was to make maple sugar that tasted more like regular sugar than maple sugar.

Why Do We Put Maple Syrup On Pancakes?

Here at the Village, we often discuss how early New Englanders tended to make maple sugar rather than maple syrup. This sugar could be used in baking just like cane sugar.

Most modern Americans, however, tend to enjoy maple syrup on things like pancakes instead. A couple of our historians weighed in on the history of maple syrup on pancakes in a recent article on Martha Stewart’s website. Click the button below to check it out. 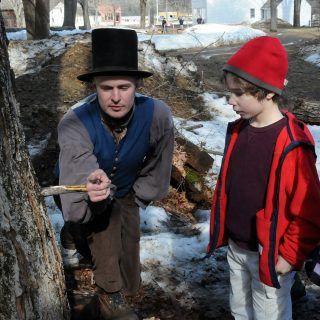