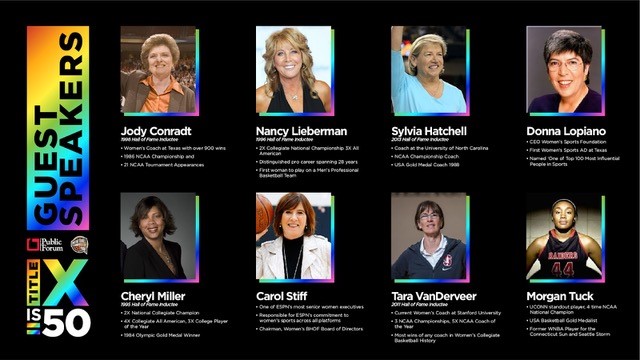 The Springfield Public Forum and the Naismith Memorial Basketball Hall of Fame have assembled an All-Star lineup to discuss and celebrate the 50th Anniversary of the passage of the Federal Title IX legislation. This hallmark legislation began to level the playing field for women’s sports funding and to offer more opportunities in organized athletics for girls and women. There will be two consecutive panels at the Forum.

The first panel will discuss the state of the women’s game prior to the passing of Title IX, the advocacy and advent of Title IX legislation at the time, and the process of its implementation featuring:

• Jody Conradt. 1998 Hall of Fame Inductee, former Women’s Coach at the University of Texas with over 900 collegiate wins, a 1986 NCAA Championship and 21 NCAA Tournament Appearances

• Donna Lopiano. Chief Executive Officer of the Women’s Sports Foundation from 1992-2007 and in that role ensured collegiate compliance with Title IX legislation

• Sylvia Hatchell. 2013 Hall of Fame Inductee Sylvia Hatchell, former Women’s Coach at the University of North Carolina earning a NCAA National Championship in 1994 and an Olympic Gold Medal in 1988

The second panel will discuss the effect of Title IX on women’s athletics today and the work to ensure equity and equality into the future, featuring:

• Carol Stiff. One of ESPN’s most senior women executives