The Grinch
A Car with a History
On view beginning October 25, 2022

Springfield Museums is excited to announce the arrival of the Grinch! Not the green furry curmudgeon whose heart famously increases by three sizes, but the sleek gray Cadillac Ted Geisel drove in California. The car has come to stay in Ted’s hometown and will be on display in the Wood Museum of Springfield History during the Museums’ yearlong Seuss-iversary! You might wonder why the car is called “The Grinch.” Its custom license plate bears the name of the famous character Dr. Seuss created in 1957 with the children’s book How the Grinch Stole Christmas! There is a story to tell about how Geisel got that plate. 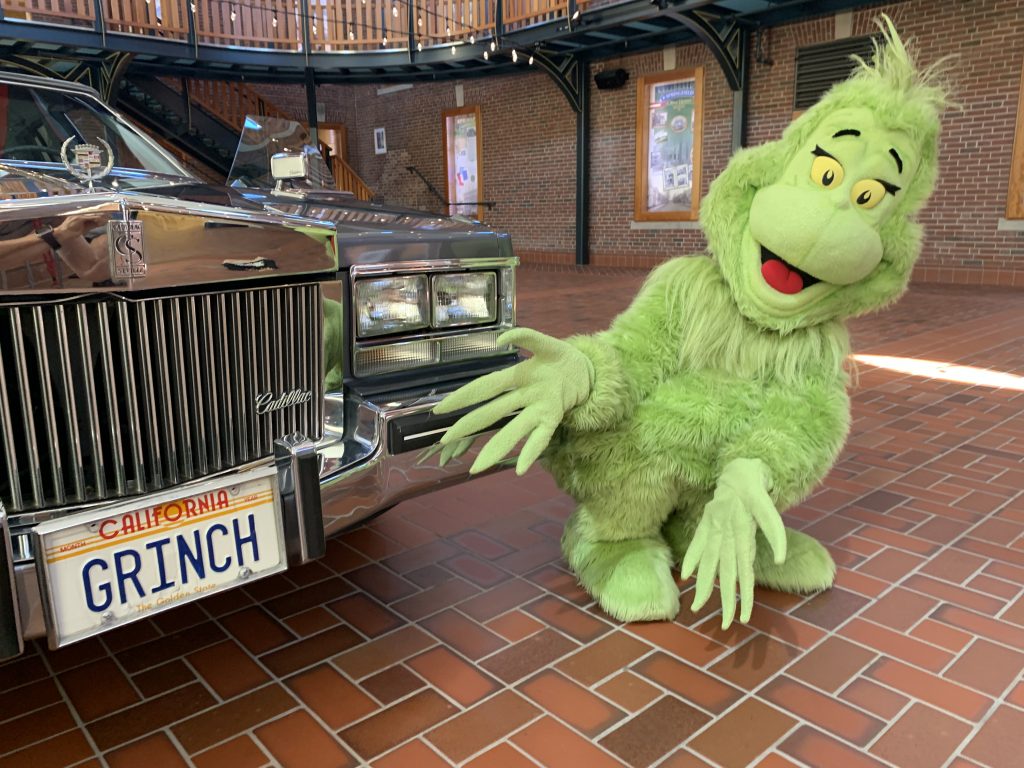 Theodor Seuss Geisel, aka Dr. Seuss, was born and raised in Springfield, Massachusetts. He eventually settled in La Jolla, California, where he drove the gray Cadillac that is currently on display at the Wood Museum of Springfield History. The author that revolutionized reading by making it fun was excited to get a custom license plate that read GRINCH but discovered that someone else already had it! Dr. Seuss, the person who created the Grinch, had to wait to get his own character’s name on his license plate! Geisel took it in stride. According to a 1979 Washington Post article, Geisel had to wait “several years for the plate because when they first applied they learned that an ardent Seuss-lover with four children had already put GRINCH on the license plates and both sides of his RV. He finally moved to Iowa City and released GRINCH back to the Geisels, with a note of apology for having hogged it so long.”

Ted Geisel’s Cadillac will continue to be on view as part of the Museums Grinchmas Celebration through the New Year. 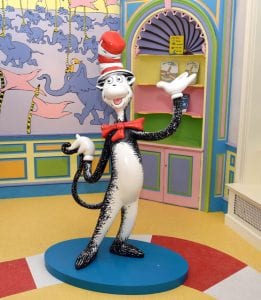 Cat in The Hat Statue at Springfield Museums

Theodor Seuss Geisel, aka Dr. Seuss, wanted to engage children in reading that was exciting and fun, not like the old Dick and Jane primers most teachers in the 1950s used to teach reading to children. In order to create a new and better early reader, Geisel considered a list of words for beginning readers. After some contemplation, he decided to begin his story with the first two words that rhymed: “cat” and “hat.” The rest is history. Although The Cat in the Hat (1957) didn’t at first find favor with teachers—the cat was too mischievous, too zany—children loved it. Some said the book sold by “playground word of mouth” as children told other children how wonderful the page-turner was. In other words, Dr. Seuss revolutionized learning to read by making it FUN!

The Cat in the Hat also found acclaim with book reviewers. In 1957 New York Times writer Ellen Lewis Buell was impressed by the simple vocabulary and lively illustrations. “Beginning readers and parents who have been helping them through the dreary activities of Dick and Jane and other primer characters are due for a happy surprise,” she wrote.

The Cat in the Hat sold more than a million copies by its third year of publication and remains to this day among the top sellers for children’s books. Many of Dr. Seuss’s books remain on best seller lists, notably Green Eggs and Ham (1960); One Fish, Two Fish, Red Fish, Blue Fish (1960); Dr.Seuss’s ABC (1963); and Oh, the Places You’ll Go! ( 1990).