The Village will closed this year on Thanksgiving Day, but we wanted to give you an opportunity to learn about how early 19th-century New Englanders celebrated Thanksgiving! 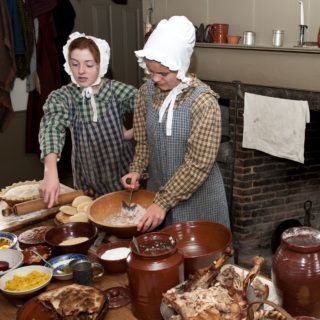 In her book Oldtown Folks, Harriet Beecher Stowe referred to Thanksgiving as “the king and high priest of all festivals.” It was a fitting name since Thanksgiving was the biggest holiday of the year in early 19th-century New England.

While the holiday is celebrated on the fourth Thursday in November now, the day of celebration varied in early 19th-century New England. Governors typically chose a Thursday in late November or early December and families would eagerly anticipate the official proclamation of the holiday. In 1838, ten of the 26 states in the Union officially celebrated Thanksgiving. It did not become a national holiday until 1863.

Preparing for the Holiday

Similar to today, families would plan to travel and gather together to celebrate with a special meal. Even before the official proclamation from the state governor, many families started eagerly anticipating the holiday and preparing for it. In Oldtown Folks, Stowe reminisced about families baking dozens of pies in the weeks before the holiday and storing them in bedrooms or attics where “frozen solid, and thus well preserved in their icy fetters, they formed a great repository for all the winter months; and the pies baked at Thanksgiving often came out fresh and good with the violets of April.”

While pie was and remains a Thanksgiving staple, there are some differences between the typical early 19th-century feast and the typical modern one. While turkey is the star of many Thanksgiving tables today, that was not always the case. If it was on the Thanksgiving table, it was often accompanied by other meats. In her 1845 book The New England Economical Housekeeper, Esther Allen Howland called for the following to be prepared for the great Thanksgiving feast:./

A Slice of History For Your Thanksgiving Table:

Consider adding a taste of 1830s culinary delights to your Thanksgiving Feast! Find original receipts (recipes) and modern translations for dishes like Marlborough pudding, carrot pie, apple and pork pie, gourd soup and more on our website by clicking the button below.