Fall was and is a special time in New England! On October 2nd and 3rd, celebrate the harvest and New England autumn by enjoying the brilliant fall foliage, tasting heirloom apple varieties (subject to change), meeting a couple of teams of oxen, and learning about how early 19th-century New Englanders preserved the harvest. 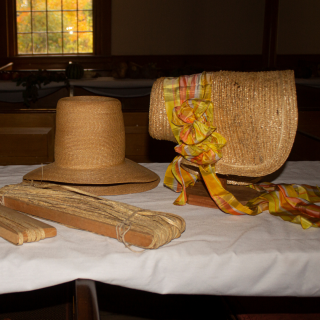 In early 19th-century rural New England, Agricultural Societies would often hold a cattle show in the fall. Many shows also included an Exhibition of Domestic Manufacture. On this weekend, we will create such a display.  Please stop by the Center Meetinghouse to see an exhibition of vegetables, fruit, butter, cheese, and items of home manufacture such as handwoven cotton and woolen fabrics, knitted stockings and shawls, and fancy work.  Village manufactured items such as shoes, tin, pottery, brooms, baskets, straw braid, and books will also be on display.

Some visitors to the Village are surprised to learn that oxen are simply a trained type of cattle, rather than a completely different animal. The term “oxen” (usually) refers to castrated male cattle that have been trained to work by command for four years. Voice commands include “haw” for “go left,” “come up” for “go forward,” and “whoa” for “stop.” Early 19th-century farmers relied on oxen for plowing their fields, hauling loads of hay or logs, and other tasks. 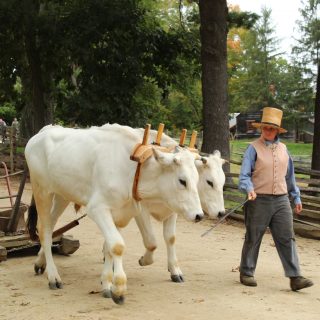 Purchase or reserve your tickets and see our current policies here.