Summer is quickly coming to an end, but there is still time to get outdoors and explore history! The Village will be open for all of Labor Day Weekend. 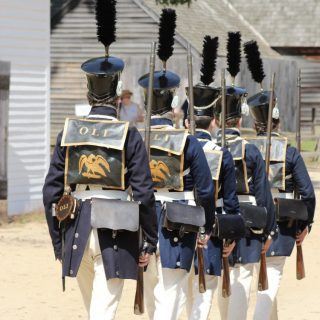 Saturday will be Muster Day!

PLUS: Kids Get In For FREE! Up to three kids, 17 and younger, are admitted FREE when accompanied by an adult paying full admission ($28) through Labor Day.

September may mean back-to-school time for modern-day scholars in the United States, but that wasn’t always the case. In early 19th-century rural New England, school terms were typically three months in the winter and three months in the summer. Older children sometimes only attended winter term, since they might be needed for summer work on the farm.

Students ranging in age from about 3 or 4 to 16 would attend school in one-room buildings like the District Schoolhouse (c.1810) now at the Village. By this time, there were numerous free or nearly free schoolhouses in New England. The literacy rate in early 19th-century New England is estimated to be somewhere in the 90th percentile! Of course, all these estimates of literacy rates are just that – estimates. Some historians question the representativeness of samples used and what reading level is considered “literate.”

Throughout the Village, kids and adults alike enjoy playing old-fashioned games like les graces, battledore and shuttlecock, trundling hoops, and more. Many days, we also have a game of 19th-century baseball for guests to take part in!

These simple games are a fun respite from the digital world for all ages.