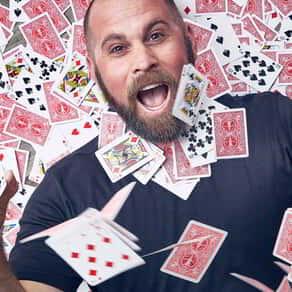 Jon Dorenbos played 14 seasons in the NFL, notably making the Pro Bowl twice as a member of the Philadelphia Eagles. He was recipient of the Ed Block Courage Award and the Eagles’ Walter Payton Man of the Year in 2016. Dorenbos holds the record for the most consecutive games played in Philadelphia Eagles franchise history. He retired from the NFL following the diagnosis of a life-threatening heart condition requiring emergency open-heart surgery.

Dorenbos competed on America’s Got Talent where he showcased his skills as a sleight-of-hand magician, making it to the finals and placing third overall in the competition amongst tens of thousands of competitors. He then put his talent on display as a guest on Ellen, who quickly became one of his biggest fans and advocates. Dorenbos has since appeared on Ellen’s show in various capacities as well as many other networks.

Known for his great sense of humor and positive outlook on life, Dorenbos uses his skills as a magician and his incredible life story to inspire audiences around the world. He wrote a book entitled Life Is Magic that draws a roadmap for how to shut that self-doubting voice up by choosing happiness. Producer Mike Tollin has optioned the book and is making it into a feature film. The screenplay is being written by John Gatins, who was nominated for an Academy Award for Best Original Screenplay for the drama film Flight with Denzel Washington.