Historic Deerfield, Sheep on the Street

Join us for some woolly fun during Historic Deerfield’s Heritage Breed Sheep Weekend!

Historic Deerfield invites people of all ages to join them for a weekend-long celebration of heritage breed sheep and an exploration of their importance in the agricultural history of early New England. Come meet these historically-significant sheep and lambs up close, watch sheepdog herding and shearing demonstrations, and learn about textiles and wool-processing through hands-on activities and other demonstrations. The event will also include great, kid-friendly activities such as make-and-take craft projects and a sheep-themed scavenger hunt!

Museum and Historic Houses: The Flynt Center of Early New England Life will be open during Sheep on the Street, and our historic houses will be open for tours!

Food: Champney’s Restaurant and Tavern at the Deerfield Inn will be offering picnic lunches to go, as well as dine-in lunch with a selection of spring wines and foods including a selection of sheep’s cheese.

Admission: “Sheep on The Street” is included with general admission.

Dogs: Because this event will have sheep and working sheep-herding dogs in attendance, we ask that visitors leave their dogs (other than service dogs) at home.

The breed that changed the culture of the Connecticut River Valley. Merinos were introduced to America in 1802. Their fleece is the finest fiber domestic wool in the world. The breed quickly adapted to New England and became extremely popular and profitable. The economy of the area changed dramatically through wool production and the establishment of woolen mills throughout the region. The medium sized breed is predominantly white and colored strains are also being bred.  They adapt well to the New England climate and lamb easily. Horns are common and curl tightly against the head.

The Lincoln Longwool is the largest of the British breeds.  The long, lustrous wool was ideal for the worsted wool mills that flourished in Norfolk, England. Many of the 18th century English woolen textiles in the Historic Deerfield collection were the product of the long wool British Breeds. Many regional English breeds were improved by using Lincoln Longwools as foundation stock for breeding. The longwools were found throughout New England in the colonial period and today their fleeces are sought after by hand spinners and weavers pursuing traditional craft designs.

Shetland sheep have evolved as a small, short-tailed breed common to the Shetland Islands of Scotland. The wool fleeces of the Shetlands are fine and soft. Fiber artists, knitters, weavers and handspinners enjoy working with these poplar fibers. The Shetlands may sometimes be double coated with a course outer fleece for weather protection and a softer inner fleece for warmth. The breed is small with a weight averaging less than 125 lbs.  A great asset is the diversity of color in the fleeces.

These sheep are representative of some of the oldest sheep introduced to the Southern States in the early colonial era. They adapt well to heat and can convert inferior vegetation to protein and body growth rapidly. This breed was a common breed used by enslaved colonists during the 18th and 19th centuries. They are hardy and can be breed throughout the year. They are good mothers and have a very calm temperament.

The flock being herded by Border Collies for “Sheep on the Street” is one of the major flocks to exist in this country.

This breed is originally of Spanish origin. Introduced in the Southwest in the 17th century. The breed is being preserved as a historical statement of the adaptive use by the Navajo Nation. The wool is found in the homespun blankets of the Navajos and is highly sought after by fiber artists throughout the country.  The breed is very hardy and adapts well to varied climates. Many are multi-horned and there can be high diversity of color in the fleeces. These examples are also being herded by working Border Collies. 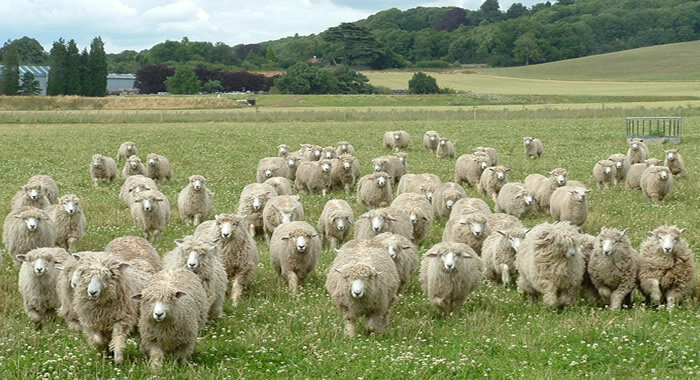