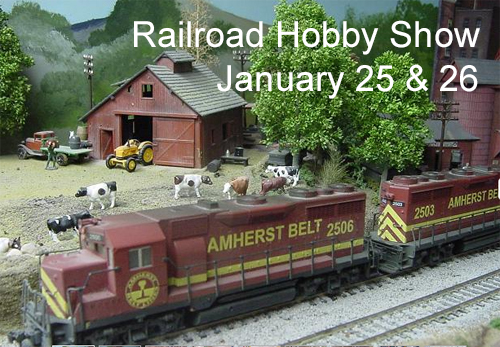 Organized by the Amherst Railway Society, this year’s giant event – taking up nearly a half-million square feet of railroading in four buildings on the grounds of the Eastern States Exposition in West Springfield – opens its doors at 9 a.m. on Saturday (10 a.m. on Sunday) and runs until 5 p.m. on both days.

There are a series of hands-on clinics at the show allowing folks to see how much fun this hobby can be! If you have any interest in railroads, this is the must see show of the year. Anything and everything having to do with trains is located somewhere on our 9 plus acres of display area.

More than 20,500 railfans and public attended the Show each of the past five years.  In 2018, the 50th Anniversary Show boasted 400,000 square feet of trains and train related exhibits…that’s 9 acres of trains!

Saturday 9:00am – 5:00pm, Sunday 10:00am – 5:00pm
The show is located in the Better Living Center and the adjacent Young, Stroh and Mallary Buildings. Get Your Tickets

In simplest terms, the Amherst Railway Society is a community of people who share a fascination with railroads, and has been for over 50 years. If we go all the way back to the mid-1950s, we find a small group of University of Massachusetts chemistry students and faculty members who realized that they shared a common interest in railroads.

In the early 1960s, the group started a railroad themed “bring & buy” swap meet on the university campus. The swap meet was an instant success. Over the next few years, the group moved to increasingly larger floor space, added railroad and model railroad vendors to the meet, and built a small modular model railroad for display.

Then, fate intervened. In 1982, the university space the group normally used for the swap meet was not available because of building renovations. So the still fledgling group decided to take a risk (a $2500 risk) and move the swap meet to the New England Building at the Eastern States Exposition in West Springfield, MA.

The show ended up being a huge success – more than covering the costs. And, that was the start of the Railroad Hobby Show as we know it.