May and June Dead River trips are often our most exciting trips of the entire season.  The first two Dead River dates feature extra HUGE dam releases. The next three dates are the traditional flows that make for 16 miles of big waves, drops and holes. Dead River trips begin with anticipation (the energy is palpable before a big water release on the Dead!) and a hearty breakfast in our base lodge (included with rafting and lodging packages) before each rafter gears up into comfortable river gear and listens to safety instruction from the day’s trip leader.

The Dead River has eight special high volume dam releases each season that produce big whitewater action over 16 miles. The river bed drops steadily during the entire run and produces long, consistent action that builds throughout the day in Class III-IV rapids such as “Humpty Dumpty”, “Elephant Rock” and “Spruce Ledges”. Each rapid includes long wave trains and sudden drops into deep holes.

Dead River trips in late summer feature much warmer water than in the spring and the same long, continuous rapids that make the Dead famous. The final, October Dead River trip, runs at the height of foliage season. At sixteen miles, the Dead is our longest trip with the most rapids. 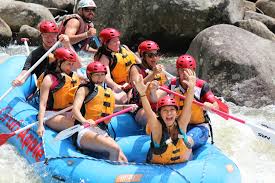