The tournament begins Friday, October 28, 2022, with Westfield State University hosting Johnson and Wales University (R.I) at Amelia Park Ice Rink at 7:35 pm and Western New England University hosting Franklin Pierce University at the Olympia Ice Center is West Springfield, Mass. at 8:00 pm. The winners will move on to play for the Alumni Cup in the Championship game Saturday, October 29, 2022 at 7:35 pm while the Consolation game will be played at 4:35 pm, both at Amelia Park Ice Rink.

Though this will be the inaugural Western Mass Invitational Tournament, this will not be the first time Western New England and Westfield State will compete with a trophy on the line. From 2008-2015 the two teams participated in the Falcon Cup, named for the then Springfield Falcons, the American Hockey League (AHL) team, at the Mass Mutual Center in Springfield, Mass. The Falcon Cup was last hoisted on October 30, 2015 and while that trophy is retired, a new trophy is up for grabs this October. 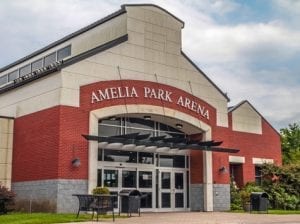